Thursday 24: A very warm welcome, master of the wind! 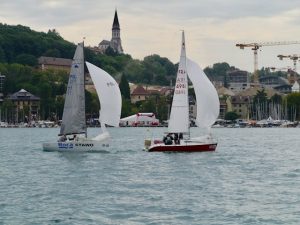 “It is this way, if you please, please take your seat in the middle of the lake, we are waiting for you”

All of a sudden, the wheels of authority in the Race Committee became active, and we were on the way!

Never before had we seen so many crews ready to throw themselves into the lion’s mouth and thank the gods for letting us get going. If I knew what I was talking about I would be tempted to apply the theory of relativity but literally this time.

Naturally, in the wind and rain that arrived some of the boats struggled to leave the quay, especially those at the far end of the quay, where with the intermediary of the storm, some masts became entangled as if in an embrace! As they crashed together, the crews tried hard to disentangle them to avoid serious damage.

During this spectacle, the fleet progressed towards the sacrificial alter…

I don’t know if it was the magnetic fields created by that lightening that boosted the red hulled club boat Kumpelka, but it was he who resisted a final attack from the representatives of the Republic of Poland to gain a victory on the finish line of the first long course of the championships.

The race continues, so does the suspense.