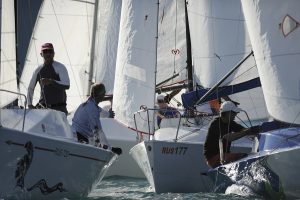 So Tuesday began with a wonderful sunny day, and almost some wind, with slight movement along the tree lined mountains. What could we hope for with this cinematographic background of mountains and lake, hoping for the God of wind to save us.

Film actors complain often about the time it takes to make a film – somewhat like us waiting for the next race.

We are beginning to get a feeling of the final results of this International regatta. We realise that it is going to be difficult to stick with these prototypes from Eastern Europe, so precise and well trained. Whatever, the outsiders will whip their charges into shape and perhaps, a legend could be made…

“Don’t forget your spurs guys, once on the water, anything could happen!”

The actors of our western left the quay in the early afternoon, already tired but happy. They could almost forget the general classification, but the top boats would not give you any space to win.

Don’t forget: In the film ‘The Good, the Bad and the Ugly’ – ‘there are 2 sorts of guys, those who dig for gold and those who hold the revolver’.
So who is digging?

Apologies for the shy wind which refused to make your boats fly today.
(we have made an official complaint to the Office of Tourism…!)